European patent litigation is currently a very disjointed affair. A European patent application starts its life being centrally examined by the European Patent Office (EPO), but this centralised approach changes after grant when the application becomes a bundle of national patents in a number of chosen validation countries.Whilst there is a 9-month opposition window for centrally opposing a granted European patent at the EPO, any subsequent litigation currently has to occur in the national courts. This means that if you own a European patent and are keen to stop a potential infringer, your only option at present is to take action separately in the relevant validation countries of interest. Equally, if you are concerned about a competitor’s granted European patent, and you have missed the EPO’s 9-month opposition window, your only current option is to start separate invalidity actions in each of the national courts.

Clearly, this sort of multi-jurisdictional litigation can be an expensive process, and can lead to different results in different jurisdictions.

However, change is coming in the form of the Unified Patent Court (UPC). The UPC is due to open on 1 June 2023 and will provide a single court for litigation of European patents across the majority of European Union (EU) countries. This represents the single largest change to European patent enforcement in decades.

In tandem with the opening of the UPC, European patent applicants will be given an extra option to consider when choosing validation countries for their European patents. Currently, a granted European patent can be validated in particular countries at the applicant’s choice, and thereafter becomes a bundle of separate patents in those countries. However, alongside the UPC will come the new option of obtaining a so-called “European patent with unitary effect”, which is often more simply referred to as a Unitary Patent. A Unitary Patent will be a single patent right covering multiple EU countries, and will fall under the exclusive jurisdiction of the UPC.

Boult Wade Tennant with offices in Germany, Spain and the UK will be able to provide the full range of services relating to Unitary Patents as well as European patents and applications.

Download our guides to Unitary Patents and the Unified Patent Court 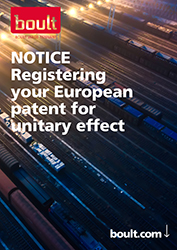 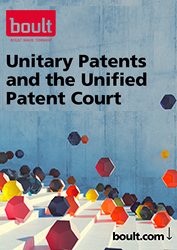 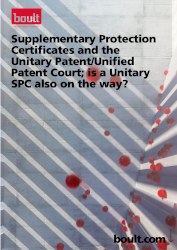