The Second Chamber of the General Court in Lego A/S v. EUIPO (Case T-515/19) have issued their decision to annul the decision of the European Intellectual Property Office which had declared invalid Lego’s application for a Registered Community Design (1664368‑0006) for the following design: 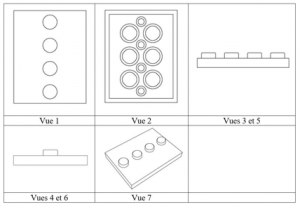 As a result, Lego should obtain a Registered Community Design for this design.

I have written previously about how I am a self-confessed adult fan of Lego (AFOL) and so any intellectual property decision concerning the Danish brickmakers is always of great interest to me.

The EUIPO Board decided that the technical function of all of these features was the assembly with, and disassembly from, other Lego bricks. The key point of Lego bricks is that all bricks are, ultimately, connectable.

Under Article 8(2) of Community Design Regulations (CDR) No. 6/2002, a Community Design does not subsist in features of appearance of a product which must necessarily be reproduced in their exact form and dimensions in order to permit the product in which the design is incorporated or to which it is applied to be mechanically connected to or placed in, around, or against another product so that either product may perform its function.

On the face of it, this may well appear to clearly apply to the Lego brick. Its function is based upon the connection of the bricks, and the features identified above must necessarily be a particular shape in order to achieve this. Does Article 8(2) CDR, therefore, mean that components such as the Lego brick are automatically excluded from Community Design protection?

Before the EUIPO Board of Appeal , Lego did attempt to rely upon the provisions of Article 8(3) CDR in arguing that they were a modular system and hence Article 8(2) CDR did not apply. However, the EUIPO argued that the modularity defence could not be used for the first time before the Board of Appeal when it was not considered before the Invalidity Division. The General Court did not agree with the EUIPO’s view on this point and indicated that there were no provisions within the Community Design Regulations that prevented Article 8(3) CDR from being relied upon by a party during the appeal for the first time.

As a result, the General Court held that the applicability of Article 8(3) CDR to the design should have been considered.

Lego also asked the General Court to consider whether the list of six features above represented the entirety of the claimed design. Lego pointed to other aspects such as the smooth surface on either side of the studs on the upper face. The General Court applied the principle of Doceram (C – 395/16) in which a single design feature that is not dictated solely by technical function would be sufficient to avoid the exclusion under Article 8(1) CDR. The General Court decided that the six features listed above by the Board of Appeal did not represent all relevant features of the claimed design and as such the applicability of the Article 8(1) CDR exclusion was not fully and properly considered by the Board of Appeal.

Therefore, the General Court upheld Lego’s appeal and annulled the Board of Appeal’s decision in its entirety.

It’s always interesting to see how the European Union Courts apply the restrictions to design protection, particularly in this case with the interplay between modularity, features solely dictated by technical function and features which must fit other features. Clearly, there will always be a great level of overlap between these three groups and the determination of whether designs are eligible for protection is hugely important. The decision from the General Court appears to set out that the exclusion under Article 8(1) CDR excluding features solely dictated by technical function is quite narrow and that a single feature not dictated by technical function is enough to avoid this limitation. They also confirmed that before the EUIPO, a changing case between the first instance and appeal proceedings should not preclude the Applicant from relying upon different sections of Article 8 CDR as appropriate during these proceedings. It will be interesting to see if Lego face any future issues in obtaining registered designs, or if this decision from the General Court will be clear guidance that the EUIPO can follow.